How To Play Hockey Enforcers

Each year during hockey season, die-hard fans watch their team like hawks to capture every score, block, and point. For those who kick it up a notch and participate in Stanley Cup betting or bet on the IIHF, those thrills are even greater as they win right alongside their team in real life.

In the meantime, between paydays from bets in hockey, there’s another type of game out there that puts you at the centre of the match. The Hockey Enforcers game is one of the most thrilling slots to play at Bodog Casino. It encompasses all the best elements of a real hockey match, and most importantly, the sweet victory at the end of the tournament when you hoist up the trophy and take home the biggest win in the league.

Hockey Enforcers is a 5×3 slot with your own opportunity to get some skin in the game with free spins, progressive multipliers, random Wilds, and more. While Connor McDavid is hitting the charts as a top scorer for the fourth time, you’ll be breaking records in Hockey Enforcers as the winner of the league’s biggest jackpot, reaching an elite status all of your own.

The ice is ready, and now is the time: you’re about to enter the arena, so prepare to enforce the law of the rink.

The moment you step into the rink with your uniform padded from shoulder to shin, and your helmet cradling your head, you can hear the roar of the crowd in the stands, and you’re certain that you can make out the shouts of your own name.

This is the final game of the season, and the entire league is counting on you to lead your team to a victory and secure your The moment you step into the rink with your uniform padded from shoulder to shin, and your helmet cradling your head, you can hear the roar of the crowd in the stands, and you’re certain that you can make out the shouts of your own name.

A real-life game of hockey holds countless plays to lead your team to a victory, and Hockey Enforcers holds nearly as many with 243 ways to win.

There are nine regular symbols on the reels that each represent a game-defining move, and each holding a different level of points. These are the symbols from highest to lowest: 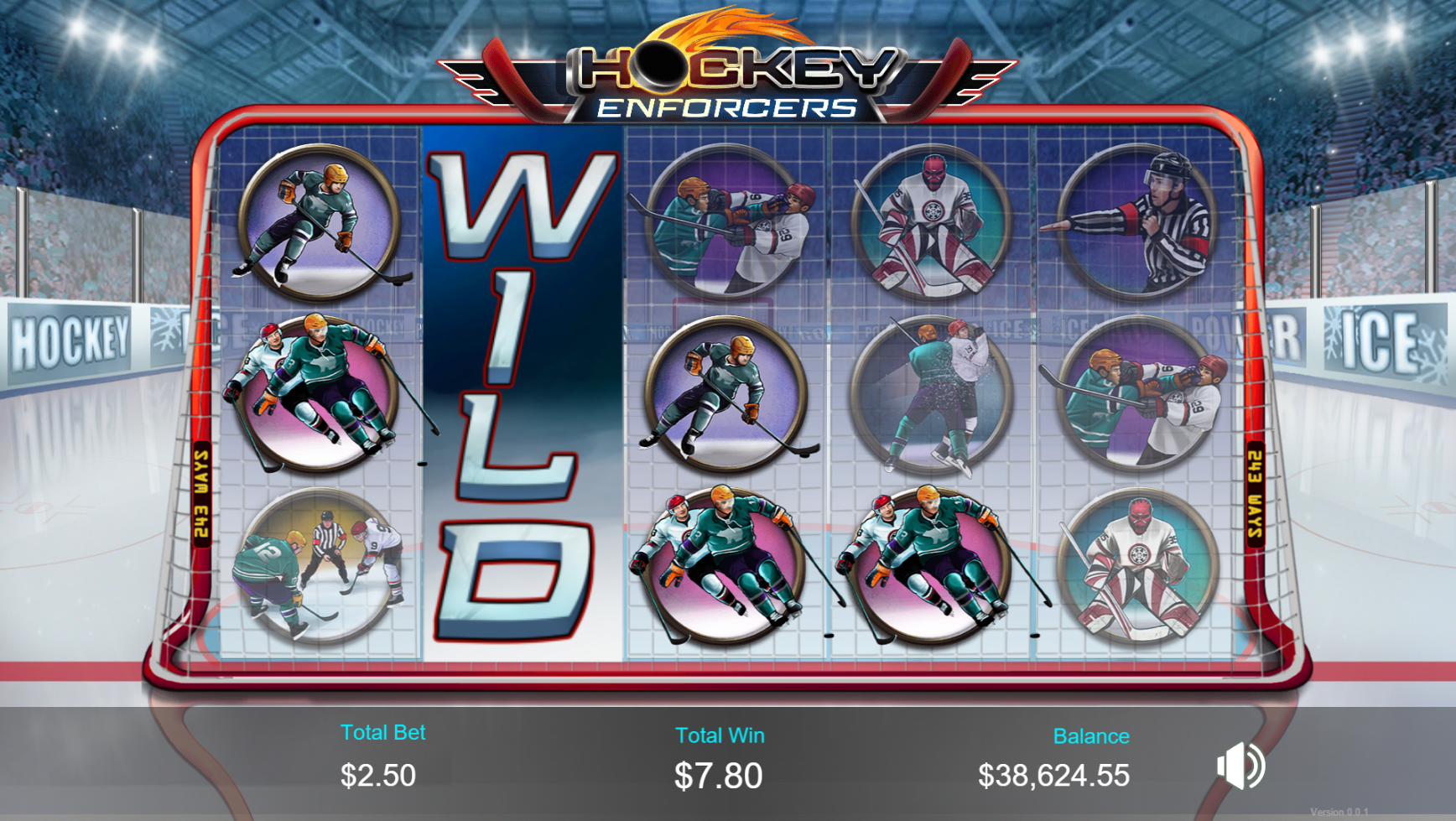 Just like a regular match in hockey, you can expect there to be ample twists and turns with this game’s features, which hopefully end up with your own name being chanted from the packed-out stands.

The second the game begins, your all-star team doesn’t waste any time in lighting up the scoreboard. After any win in the game, the symbols involved in the win shatter like ice and tumble from the reels, allowing new symbols to take their place and assist for another score until no wins are left.

Every fan knows that it’s your team that claims the title year after year. Your elite status in the league is evident in your scatter, which is a puck that bursting in flames and slicing through the reels with the highest payouts in the game awarded from anywhere.

You can be sure this game between two long standing rivals will be savage, but not nearly as wild as the red goal light. Whenever it lands on the reels, it can replace any other regular symbol in the game to help form a win. If multiple wilds land on reels three, four, and five, they stack to record even more wins for your team.

While you’re dodging defensemen and charging the goal, at any point in the game up to two reels between reels three, four, and five can turn wild on a whim, sending the entire rink into a tizzy of points.

The scatter puck on fire does more than blow up the scoreboard in your game, and it’s also your ticket to ample free spins, depending on how many you land.

…and those all come with progressive multipliers that can reach up to 10x your total bet staked.

Bet On Hockey At Bodog

After you’ve boosted your bankroll with wins from the Hockey Enforcers game, it’s time to funnel that capital into another payday at Bodog.

In the Sports tab at Bodog Casino (both on desktop and mobile), there are countless hockey betting options for you to make a buck off your favourite team or an upcoming match.

If you’ve never bet on the NHL just yet, don’t let it hold you back. Take a minute to catch up on our easy guide for how to bet on the NHL.

Then, dive right into the odds for Stanley Cup betting or IIHF betting for 2022.

When you bet on the Stanley Cup, you make a prediction for the team that will win the entire event. As of now, the Colorado Avalanche are leading the books with the best odds to win it, with the Florida Panthers and Calgary Flames not far behind. Last year’s winners the Tampa Bay Lightning are five on the list, but all sorts of upsets could go down before the Cup is handed off.

The International Ice Hockey Federation tournament is going strong as we speak, with new matches every day to bet on. Will the favourite USA team take over Latvia on the 13th, or will Austria cause a major upset to the USA two days later? The lines are officially open, so prepare your wager and make a choice.

No matter how you swing it, Bodog Casino is the place to be to make a profit from following hockey. From our top sports-themed slot games like Hockey Enforcers to real life matches, and futures betting for championship awards, the world of hockey has plenty of winners that go beyond the athletes in the games – so it’s time to give a puck and put those wagers on ice!

With the IIHF World Championships taking place right now, hockey lovers will want to head on over to Bodog Sportsbook for all the latest news, views and tips on the ice. You can’t play hockey to its fullest on your own, so why not make the most of our profitable Refer-a-Friend scheme and build your own team at Bodog? Bitcoin betting is the way to do it, or however you like – the choice is yours.