Sports are already kind of a big deal at Bodog Casino. As the #1 place to go for sports betting in Canada, especially Super Bowl betting, we know a thing or two when it comes to action.

There’s no greater game to experience the thrill of sports and test your skills on the field than with the Gridiron Glory slot – especially with Super Bowl LVI right around the corner. This game will not only have you making plays and scoring touchdowns between plays during the Big Dance. You’ll also find yourself winking at cheerleaders, celebrating with your teammates, and maybe even tossing your jersey in the air after winning the final prize of 5000x your bet.

If you want to see whether or not you’ve got the guts and the grit to put on the uniform and make it on the football field, then stick around here and see what it takes to win the trophy with this Gridiron Glory game review.

Playing Gridiron Glory can be just as intense as halting the offensive line on the football field. 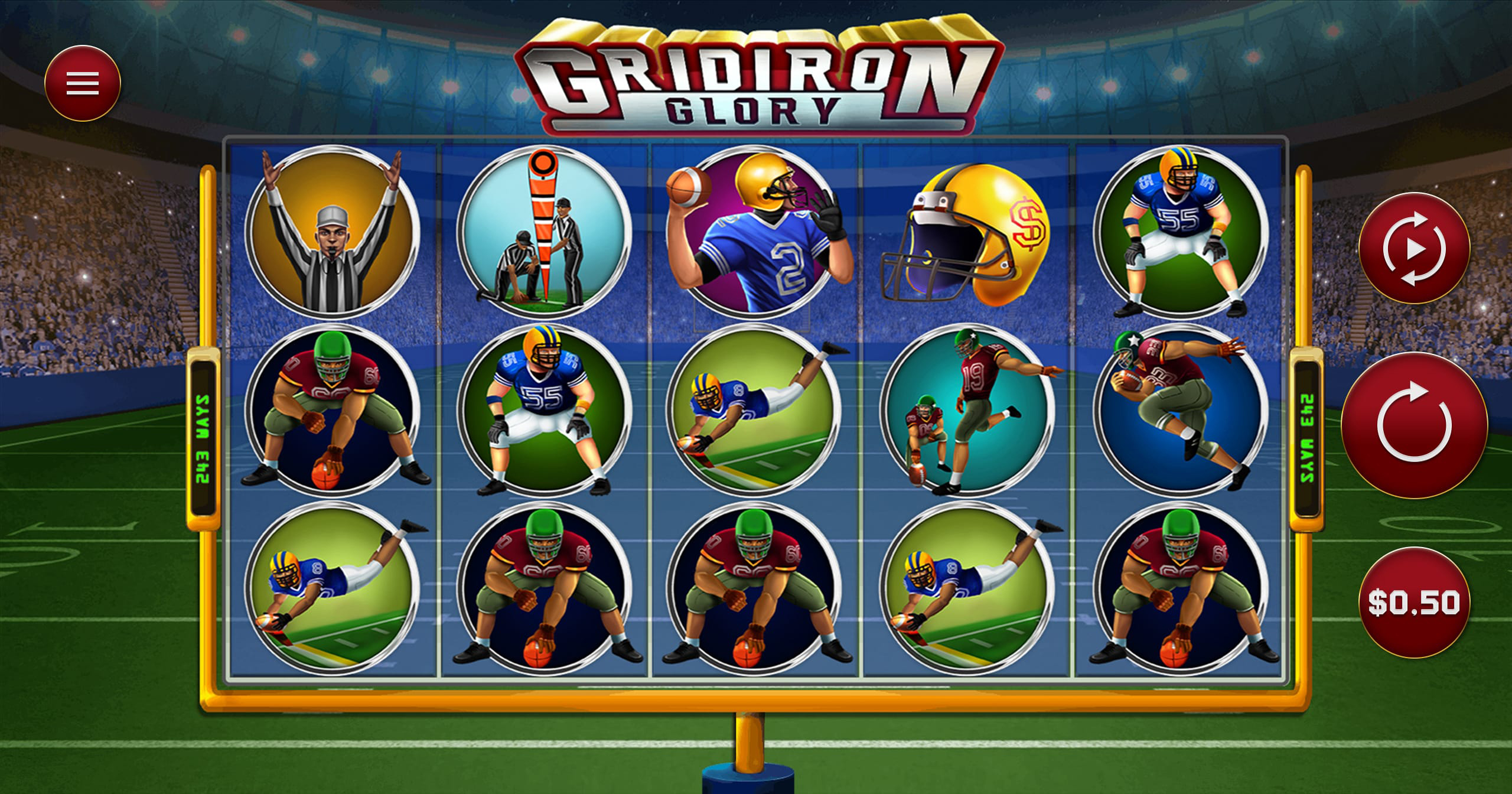 While you’re watching Super Bowl 56 unfold in real time on February 13th, you won’t want to miss a moment to experience some wins of your own.

With this game, you’re on the blue team, and you’re the first pick for MVP of the season. There are 5 reels and 3 rows to pass through, and 243 ways to make a touchdown. The cheerleaders on the sidelines are rooting you on, and their pom poms ruffle over winning symbols, revealing new ones underneath that help you score another win.

The referee is keeping tabs as the highest paying regular symbol in the game. The crowd is hyped up in the packed-out stadium, and they go wild as you land symbols that complete the coaches play.

The action symbols from highest to lowest are:

This is what you’ll see on the field before the whistle blows:

Aside from the thrilling regular game play with a roaring crowd, Gridiron Glory has plenty of features to keep you on high alert as well.

While you’ll no doubt feel the glory of the game when you land a pass and run the ball into the end zone, most of the glory on this field is held within the Wilds.

The bright yellow helmet is your first Wild. The key point to remember here is that the more Wilds you get in the base game, the more your wins are boosted. The helmet Wild appears only on reels 3, 4, and 5. It can substitute any other regular symbol in the game to help you score a win.

Another type of Wild can be found in the base game, but you won’t ever know it’s coming. Just like an opponent could surprise you from behind with a tackle, the expanding Wild is a gimme from your rival team. He can charge the reels at any time and turn the entirety of reels 2, 3, and 4 into one gigantic Wild symbol. What’s more, he can transform two entire reels at one time. That’s the kind of score that would make a team

The Wilds in this game will already have you celebrating nearly as loud as when Tom Brady and Rob Gronkowski led the Bucs to the championship win in Super Bowl 55. Having said that, just two players can’t carry an entire team, and just two great Wild features can’t carry an entire slot. Luckily, the soaring football scatter is just as important to the play.

The football scatter can pay in any position on the reels. Landing three or more will trigger a round of free spins with a progressive multiplier that reaches up to 10x. The amount of spins you get depends on the number of scatters that land.

Now that you know how the game is played, and you’re likely dripping with sweat from the adrenaline rush, let’s make sure you know how to operate the controls like a pro as well.

As any good coach will tell you, practice is essential for your best performance on the gridiron. That’s advice you may want to heed by playing the game in Practice Mode for free before you play with real money.

If it’s brutal action and expanding Wilds you like, then ditch the field for a minute or two and head to the ice with Hockey Enforcers. This rink is just as packed with expanding Wilds and prizes, and you’ll experience just as much glory when you win.

There’s another type of football that’s also scoring jackpots, and World Cup Football is ready to compete with stacked symbols and plenty of re-spins.

Speaking of soccer. In Zombie FC there’s a lot more at stake than just the trophy, and you’ll have to navigate the pitch alongside the undead and tumbling reels.

Any gamer at Bodog who loves to bet on sports is going to love getting dirty with Gridiron Glory. The adrenaline is raging, the competition is fierce, and the prizes are almost as good as winning the Lombardi Trophy itself at the Super Bowl.